Will commodity traders feel confident enough to step out to the cloud?
20 December 2013

The perception that Commodity Trade and Risk Management (CTRM) software delivered as software as a service or hosted in the cloud is a new idea is quite wrong. There have been a handful of vendors offering such a thing for many years. However, in recent years, the idea has truly gained momentum; largely due to the increasingly widespread adoption of SaaS and the cloud for other mainstream business applications and its well know total cost of ownership benefits. 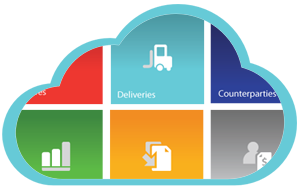 When we started to develop Agiblocks, we adopted a modern technology stack and designed the software to be deployable either in a traditional on premises model or as SaaS or hosted software. In 2014, we will begin to offer the SaaS/hosted version of the software to the market as we see both demand and the benefits of the model.

While Agiboo sees increased interest in SaaS and the cloud from the industry and our customers and prospects, we also are aware that commodity-trading firms can often be conservative when it comes to IT generally and, are rightly concerned about security of access to their applications and data. A quick search on Google for SaaS and the cloud will reveal the perception that security is an issue with the model. However, is it really? How well do you think that you protect your data and Commodity Trade and Risk Management system from hackers, disgruntled employees or other security threats? How well thought through are your backup and recovery processes? The fact is that companies who manage data centers are in that business not the business of trading commodities. The chances are pretty good that, when it comes to security, backup, and recovery, they do a better job of it than a trading company can.

Having your CTRM solution provided as a hosted service or SaaS (multi-tenanted) means that you will have negotiated a service level agreement with the vendor. It is in this agreement that security and other issues can and should be addressed. When done correctly, the chances are strong that you will actually gain better security and disaster recovery for a significantly better price than if you tried to do it yourself. For many smaller trading firms in particular, this is an unbeatable value proposition.

Commodity traders do tend to have a history of traditionally licensed on premises CTRM solutions and a culture of being risk averse however, as costs rise and trading margins get thinner, IT costs legitimately become a target for scrutiny. With at least a ten-year history of a minority of trading firms utilizing hosted and SaaS delivered solutions, increasing corporate comfort with utilizing SaaS for other business critical applications, and a thorough review of the benefits and pitfalls of the model, Agiboo believes that CTRM delivered in the cloud will gain many users over the next several years. There inevitably will be some who wish to remain with a traditionally license on premises Commodity Trade and Risk Management solution. Either way, Agiboo has the solution for you.

The latest updates about our CTRM software Agiblocks.